Props to Energy Flash and cohort for digging out a fine long read on the early ’90s Roman techno scene, (I would never have found that myself). All the heads quoted seem to keep it humble and being a fan of that sound/era it’s refreshing to read a historic appraisal that doesn’t ultimately veer into hyperbole and making the balanced conclusion that there was no legacy (and why should there always be one after all?) – it was just the time and place, “a style generated by a specific period, by a limited number of people.”

Inspired by the above, I pulled out a 1997 (maybe ’98?) issue of the French techno ‘zine L’ultime Atome from my archives and scanned up two long(ish) interviews here with lynchpins Marco Passarani and the brothers Fabrizio & Marco D’Arcangelo. For French speakers only (and Discogs nerds), sorry people.

(Note aside: Lory D’s new album….don’t even go there). 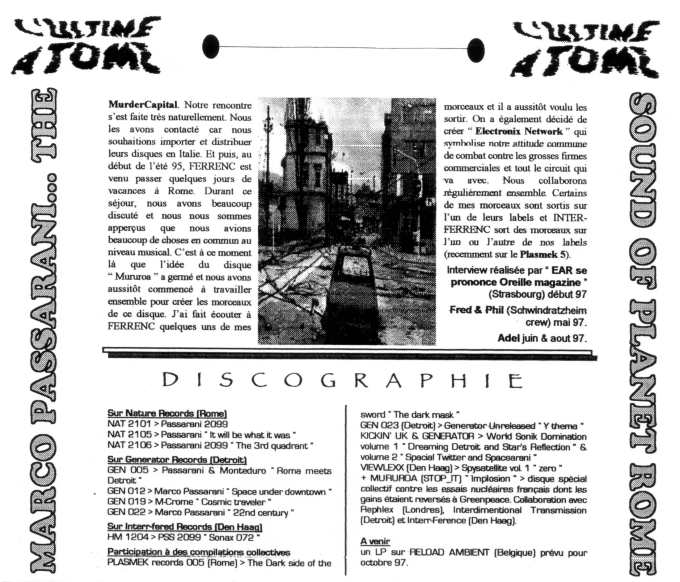 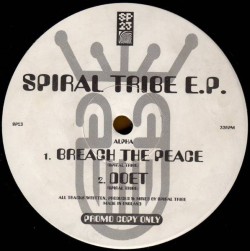 Ok, ok, ok. Last one I promise, before I come back to reality.

If one tune epitomises the sheer intensity, unstoppable momentum and ‘avin it abandon of that period for me, it surely has to be  Spiral Tribe’s “Do Et”  off their seminal first ‘Breach The Peace’ EP. This is before they became synonymous with their more incessant, bubbling 4/4 French ‘Tek’ sound and when sonically there was still  ‘ardcore dropping in their sets (possibly their most vital and exciting period…for me anyway). When I found my copy of the EP in Rough Trade W11, I remember being both totally gobsmacked and feverishly excited (but also with a creep of disappointment) that something of their energy had materialised in physical recorded form and cover artwork. It felt like contraband from the netherworld but also as if the vaults had been split wide open.

Regardless, this tune stands as the most joyful, hilarious (and inadvertently poetic) ode to Free Parties/Rave ever! Over to you MC Scallywag.

“If you’re a raver and can’t score an E…you must be buzzing on Acid!” 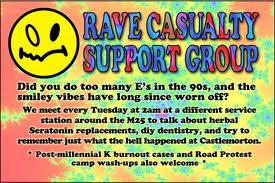 All that graffiti reminiscing got me all misty eyed about other characters from back in the day and while I don’t in any way want to turn this into a retro archiving sesh (…too many quality sites already doing that job on a far more impressive scale!) I couldn’t resist another follow up. And this segues nicely out of Fume.

The first proper rave nights I went to were the Tonka Sound System nights at the Zap in Brighton (circa 1991?) Harvey & Choci… what a line up! Can never forget the decks set up right in the middle of the dance floor below the stage, Choci with his shirt off, girls massaging him mid-set, everyone down to the last wo/man totally off their nut. Sweat, Vicks, Amyl and uninhibited dancing. Wildly eclectic sets right across the spectrum (and if you were lucky an after party on the beach down at Shoreham or wherever). And God’s honest truth, I cannot remember a single tune from those days, except (for some bizarre reason) Naz aka Naz’s “Organised Crime” !?! – the Godfather trumpet intro. “Just when I thought I was out…They pulled me back in.” I remember Choci dropping that at the peak of collective euphoria and the whole place going OFF!!! 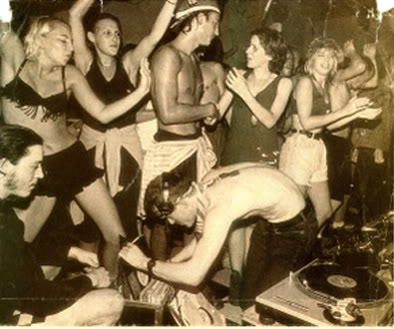 “Your name’s not down…you’re not comin’ in”

Whatever happened to old Choci I started thinking?? He had a pretty wild run, from his Choci-Roc graffiti days in NYC, the first British writer to get up on the trains, to his DJ/producing/studio and record shops in Soho. The first record shops where I made weekly trips to and started buying and collecting vinyl obsessively from in fact (and where I discovered many an early Industrial Strength/Magnetic North/Drop Bass Network/Praxis hard techno gem and their like). Heady days. He went all Acid later and my visits tailed off but it was definitely a seed of my musical turn on and tune in. 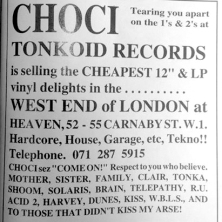 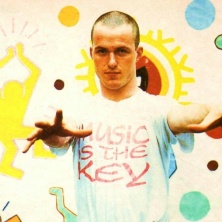 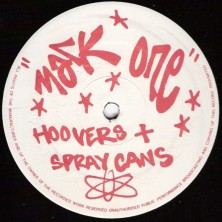 I’d forgotten, or probably didn’t even register at the time, that one of his first tunes (if not the first?) was Mark One “Hoovers and Spraycans” from 1991 – featuring a pneumatic drill sample no less (Nomex would have been proud!) in a ’91 stylee – 4/4 kicks AND old school breakbeats. Solid ‘ardcore tune. Anyway, from what I can tell he’s back at the walls and spraycans now with the Team Robbo crew (who had that old school v new school spat with Banksy), some mention of him going into carpentry and not involved in music anymore theses days.

Stoked to be the proud owner of one of these first official prints, still available here, from one of the kings of the London graffiti scene (although it feels like something of an oxymoron to have actually paid for a ‘print’, to have it framed and now have it hanging on my wall. All a bit art gallery and coming in from the cold? But that’s my problem for forking out the money like the middle class twat I am, not his).

Anyone living in London in the early 90s could surely not have missed his name and tag even if only filtered peripherally. He was simply part of the landscape, literally everywhere and absolutely destroyed the underground, particularly the Hammersmith & City line!

No two ways about it, Fume and his crew were seriously hardcore and lived and breathed paint well into the late 90s. There still doesn’t seem to be too much out there on him – to his credit! but I dug up this archived Bomb Alert Magazine interview with 2Kold that gives a snapshot of the kind of lifestyle they were all leading and it all sounds pretty full on and out there ‘on the perimeter’. Amped and angry and totally dedicated to their results. “It’s no use painting the odd wall with pretty colours. You’ve got to smash every depot. It’s a war and no-one can control us”. Seems there was a lot of quite violent rivalry and hate later on which makes it all sound even murkier. See the 1997 Big Issue feature.

This got me reminiscing about that certain period of London sub/culture. Fuck, there was a lot of hardcore business going on then! from the graffiti, the music, the raves, Spiral Tribe, right through to Damien Hirst’s shark & Marc Quinn’s ‘Self’ in the hi-art world, you name it. John Peel & Andy Kershaw on the airwaves. And still no www! – Pre-Starbucks, pre-Pret a (fuckin’) Manger, pre-Sainsbury’s Local virus, pre-fixies (except Buffalo Bill maybe heh?), pre-Flat (fuckin’) Whites, smokey boozers, Mutoid Waste squat still down Portobello Road (props to Tom Vogue’s exhaustive ‘Getting it Straight in Notting Hill Gate: A West London Psychogeography Report’ for making my mind run back in that particular hood).

My internal tape rewind is unspooling now like one of Krapp’s Last Tapes! But that’s why I bought the print and have it on my wall – every time I sit on the sofa with a cup of tea and look at it I think of all of the above and more. Dem days. 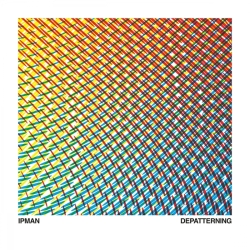 In contrast to Rabit’s fart-in-the-wind of an album this just seems to get better on repeat listening and feels like a well researched, deeply knowledgeable journey through past and current genres.

I have to call him out though. His biggest, most shameful faux-pas is kicking off the whole thing with an utterly by-the-book old-school breakbeat ragga re-fit(shit). Absolute derivative nonsense. By this stage I think we all have to agree there’s nothing more to say or update on the matter. My advice: avoid, delete or fast forward. It’s a better listen without.

Skirting the edges of Deep House, Techno, and Bass the rest of the material proves a masterfully tech exploration of route finding. There’s no pointless probing or faffing around on the arrangements. They choose their line and go for it, taking in their influences without fuss and with almost casual confidence.

“Gravity” is a long slow builder; a subby, banger that kills it on the breakdown with a re-polished, wobbly, reese and vintage doomcore claps. “U” is most definitely the other stand out track. Sticking to his formula of slow development and filtering in the reese damage, it’s a fine, thick, dense stew of balanced flavours.

In the end the sense is you don’t really know what you are listening to? or what genre? The micro-referencing in the patterns and shuffle, the nods to various tropes: something’s been updated but you’re never ultimately sure what?

This came out in the summer on Ancient Monarchy. Absolutely no info on the artist and no leads on discogs either? Whoah! A proper howling, dank, cavernous, 131bpm slice of breakbeat ruffage dripping with funky old skool vibes, from the bowling bass to the scratchy hiss of bit reduced samples. The pitched down gunshots seal the deal. Nothing new, but a total dancefloor vibe controller to stick in the bag and drop at peak hour with the strobes going and everyone with their gurn on.